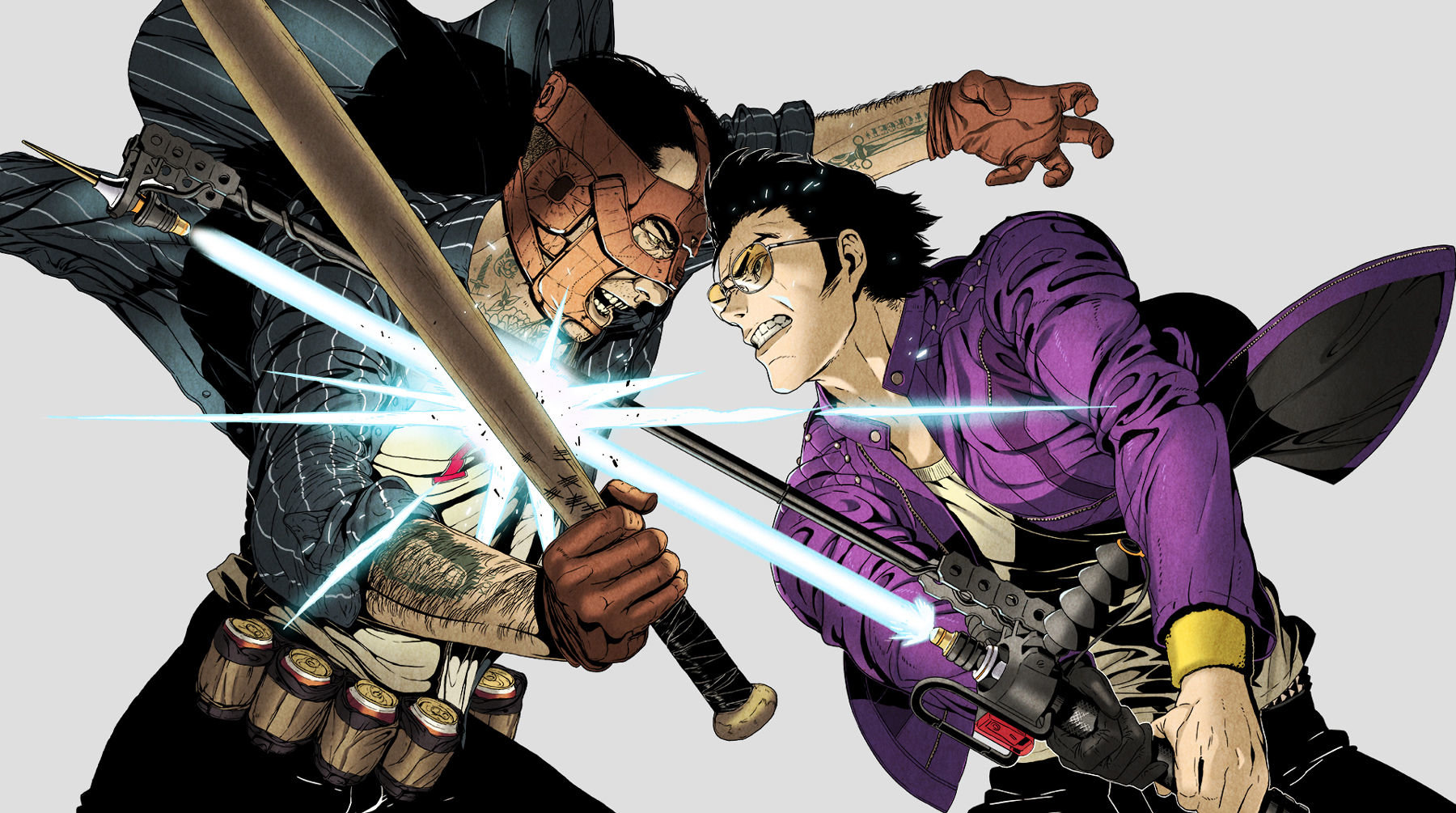 In a world of heroes and assassins, our hero/assassin Travis Touchdown finds himself sucked into the world of video games with Badman, a guy who came to kill Travis for revenge of his daughter. Developed by Grasshopper Manufacture and published by Grasshopper Manufacture and Marvelous Inc. This game really makes you wanna keep on going with its funky music and hilarious conversations.

Travis Strikes Again: No More Heroes (from now on TSA:NMH) is a game that, in a way, doesn’t take itself very seriously. with a bunch of funny characters, well-written dialogues and saving the game while doing a number on the toilet. In this game, you get sucked into a game console called Death Drive Mk II (from now on called DD), which uses “Deathballs” as its game discs. Once you boot up the DD, you get sucked into the game world, the place where all the fun is!

TSA:NMH doesn’t have the best graphics, but it does have an interesting and unique style of art that makes it stand from all the games that I have played. Every new level felt fresh with different art styles and a bit of difference in the camera placement. while it is mostly top-view third person, in some levels you had a third person side-view.

Gameplay-wise this game also as a distinctive feature, with every Deathball game you get a slightly different gameplay mechanic. For example, in the third Deathbal, called “Coffee & Doughnuts” your game turns from a top-viewing tacking camera to a side-viewing camera. Coffee & Doughnuts also has a bit of platforming in it, with bouncy doughnuts, unlike the second game, “Life is Destiny” that has rotating street blocks.

The fights in TSA:NMH, other than the boss fight, feel kind of repetitive, even though there’s a new enemy introduced every now and then. You’re stuck in a square area with a bunch of enemies and just run around them and spam your attacks until you’re done with them and move to the next batch. But even though the fights are pretty repetitive, it doesn’t make it any less fun, especially when playing with a friend.

Player customization isn’t really important in here because you’ll be just running and slashing all your way through anyway without really looking at your character, rather looking for secrets (to get stuff to customize your character’s shirt). To be honest, to me it was more about the rush of finding secrets.

Now for the soundtrack. I’ve never played a game that its soundtrack just made me want to go faster. Yeah, there are a lot of racing games out there with a great soundtrack, but with this game, it just felt so satisfying running around hacking and slashing till I finish the stage.

Now for some things that kind of annoyed me. TSA:NMH doesn’t really explain the story behind what happened prior to the game. In the first cutscene, I was just confused and didn’t know what’s going on. The second thing that bugged me is the long “story” segments before getting the next Deathball. While the first time was kinda cool, sitting through 10 minutes of text, old-school pictures and repetitive music kinda annoyed me. the only thing I liked about it is that you can fast forward it.

After having fun with this game for a while I just have to recommend it. Yes, it does have its flaws, but nothing really is perfect. With the funny dialogues, fast-paced combat, toilet saving, cool mechanics and amazing couch time with friends I cannot recommend it enough.

Travis Strikes Again: No More Heroes Complete Edition is available for the Nintendo Switch, Playstation 4, and Steam for 40$ and at this price mark it is a total DEAL. Why are you still here?? Go get it!