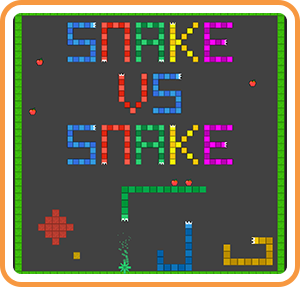 On one hand, Snake vs Snake is a very simple game, but developers Casual games’ party mode competitive spin on the classic mobile game makes it an experience that is worth your time.

When you first boot up the game you are greeted by an 8-bit screen that has an arcade from your childhood that had all those classic games, and when you actually start playing, the soundtrack gives a whole new meaning to arcade techno.

The game is pretty simple, as you would expect from a game revolving around the idea of snakes eating apples, and regarding the single player you will not be surprised, you have a classic endless mode that features a worldwide leaderboard and pre-built levels that make the whole experience a bit more challenging. 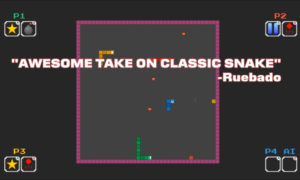 The game really turns it up to eleven when you enter the 4 player co-op multiplayer modes that really turn the game into something special and worthy of you and your friends’ time.

You have “battle mode”, wherein a Mario Kart-like fashion you will be collecting power-ups that you will have to utilize against your foes on the field, like a blocked shot, that with a hit to the head kills your opponent, or if missed creates a block that will put a wedge into your friends route, and a bomb that on explosion will create an unpassable terrain, and as the match goes on and you grow and become faster, havoc ensues.

“Tail runner” is also an interesting mode in which each snake grows automatically without the need of apples, and the objective is to take up as much space so the other snakes have no options but to run into your body and perish. 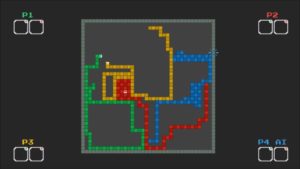 In “pew pew” you will be pit against your other contestants with only the shot power up to be collected, and the objective is, of course, to shoot your friends in the head and stay last standing.

But of course no game is without fault, one of the things that left me a bit annoyed is the delay between the generation of apples on the map you play in single player and if you decide to get a bit nostalgic and go on a pursuit of a top score like in the old days, it takes at times a few seconds for an apple to appear, and when you grow really big towards the end, it could be a bit frustrating as it takes away the ability to plan your route in advance.

In my opinion, despite the simplicity of the game and the low production value, “Snake vs Snake” is a great party game and a good opportunity to reminisce about the old, simpler times.

The game is available on Nintendo Switch, Xbox One, and Android.