Two friends suddenly whisked away in their treehouse to a magical place in this unique puzzler developed by The Voxel Agents.

The Gardens Between should be commended for the marvelous way it sets out its tone. Right from the title screen, you get the vibe of the entire game. Part gloomy, part nostalgiac, with friendship at its core and childlike creativity guiding the whole experience through. The game starts with our two characters, Arina and Frendt, sitting in their tree house on a rainy night exchanging awkward looks with each other when all of a sudden, some type of worm-hole-time-warp thingy (for lack of better term) takes them, along with their tree house for an exciting adventure.

The titular gardens serve as the game’s levels, with each set representing a different aspect or memory of the characters friendship. This is where the artistic design of the game really starts to shine as each level showcases high levels of creativity with old boxy television sets and a variety of household items strewn across lush garden like mountain-islands. What you’ll actually be doing across these magnificent gardens is where things get really interesting. 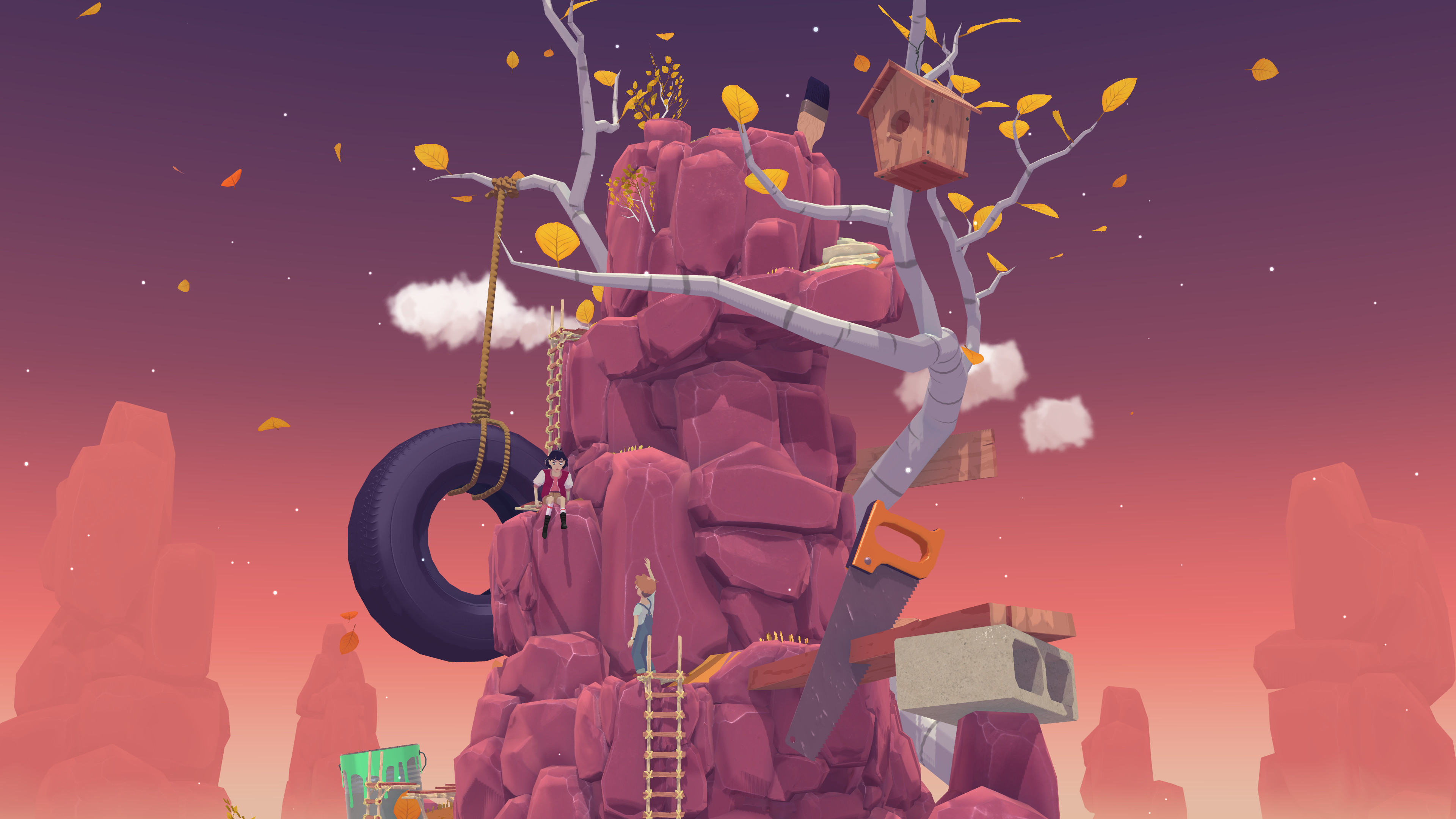 What The Voxel Agents created here is a unique blend of environmental puzzles with time travel trickery that starts out simple and accelerates fast until you are required to keep track of a multitude of moving parts in your way to each puzzle’s solution. The objective in each level and the controls from the game are remarkably simple, but deceptively so.
Arina carries around her a lantern that needs to be filled with light and carried to a shrine at the top of each island. The controls are comprised of just 3 actions available to you: forwarding time, reversing time and interacting with certain objects in the environment.
This rather simple setup gets you going quick but before you know it, more layers of complexity and intricacy pile up until you are zipping time back and forth repeatedly trying to understand what you are missing, and on some occasions even left scratching your head in bewilderment before the incredibly satisfying “Ah Ha!” moments the game encourages in spades present themselves.

To give an example, at one point Arina will be jumping to clear a gap and land on a saw that is in the process of cutting a wooden plank. Manipulating time to repeat the moment of her landing on the saw will lead to the plank to be completely sawed in half and open up a new path. I can go on, listing examples of remarkable creativity and all the ways the game seamlessly introduces and teaches you new puzzle elements but I wouldn’t want to spoil anything. which in the case of The Gardens Between it is extremely relevant as it is unfortunately very short. It took me a little over 2 hours from title screen to credits Now, that is not a lot of time for a video game by anyone’s standards. But I am not one to judge a game’s value by the time it takes to complete. I had a truly great experience that managed to put a smile on my face many a time. The game is also perfectly suited for younger gamers, which might even take a little longer to complete as they try to wrap their brains around this genuinely special game

The Gardens Between is available on PC, Mac, Nintendo Switch and PlayStation 4