In today’s market, it’s nearly impossible to find a long, DLC free, single player game. Fortunately, Game Farm’s new game Shadows: Awakening delivers multiple dozens of gameplay hours. So, What exactly is Shadows: Awakening all about?  does it actually keep you interested for the entire (and long) playthrough? I’m going to answer all of this questions,  but first, let’s talk about the plot.

Shadows: Awakening puts you in a control of a demon simply named Devourer, the game starts in a mysterious cave when you quickly discover you (the demon) has the ability to possess and control bodies of  mortal creatures, this is a key gameplay element and not only a plot-related one, but I’m going to discuss it later in the review. The first Puppet you are going to control is crucial to the rest of the playthrough, each of the first 3 available puppets, hunter,  warrior and a sorcerer, have different plot lines, different quests, and different abilities. In short, a minimum of 3 playthroughs is required in order to experience the full story. Unfortunately, I couldn’t play through all 3 due to time constraints. So, here is the plot line of the sorceress Evia, Daughter of Fire.

The Garullian Empire was a mighty force within the heretic kingdoms. But, a war against an unknown artifact began the fall of the once mighty empire and turned the Great capital of Thole into a lair of thieves and criminals.  317 Years later, the resurrected Evia (the heir to the throne) is on the run from various enemies. Running for her and the other puppet’s life, she tries to recover the missing parts in her empire story, and understand what that artifact was, and who used it. 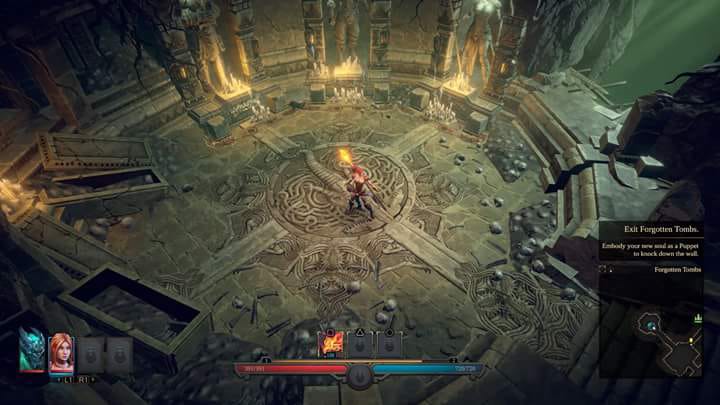 As you probably noticed, I mentioned the word “puppets” several times already and it’s about time for an explanation. The world of  Shadows: Awakening splits up into 2 realms. The Shadow Realm, and the Mortal Realm.

The Shadow realm is the home of countless demons and spirits of the dead. The only character who can transfer into the Shadow Realm is “Devourer”, the demon whom I spoke of at the beginning of this review.  On the other hand, the Mortal Realm, as its name suggests, is the home of the mortal creatures. Humans, spiders, goblins scorpions and other fearsome enemies will wait for you inside the mortal realm.  In order to progress further in the game’s campaign, a switch between the realms and characters are necessary. For example, the shadow realm contains hidden paths that are going to be discovered only if you are inside that realm. Furthermore, certain enemies are immune to some elemental attacks. For example, there’s a boss who is immune to fire damage,  so Evia can’t be used in the fight against him. Stepping deeper into the game’s complex fighting mechanics I discovered that some mages and high tier enemies have a more powerful version of themselves when you switch to the shadow realm, adding to the difficulty of battles and makes you learn every character and their abilities.  Shadows: Awakening’s combat system is the definition of the phrase “easy to learn, hard to master”.

And here we are, at the last subject of the review, the RPG aspect. Yes, you heard me. This game not only includes a hard-to-master combat system,  good lore and plot. It’s an RPG on top of it all! Magnificent!

Although it’s a top-down shooter\action game, Shadows: Awakening has all the makings of an RPG. Side quests, towns full of activities, guilds, skill trees and even a deep progression system. Each character that you collect (you can hold 3 characters+ devourer at any given time) has a different ability, class, quests and equipment. The RPG elements turn your characters from mere puppets into something that feels alive inside the game world. Evia is charismatic and desperate to find out the truth, the other lords and guildmasters will try to help her and make her more powerful by giving her quests and money (and even spare her life in a couple of points). Devourer will get special quests from his realm and will try to redeem lost souls and even the little goblin has his place, although he can’t get into cities and castles (poor goblin).

Like every RPG, Shadows: Awakening has a modest skill tree and a deep progression system. Every character has their own abilities that you need to consider while upgrading. I can’t get too deep on this topic because I’m afraid I will spoil some of the plot so you’ll just have to take my word for it.

Shadows: Awakening is great. It has a good plot, the game feels alive and combines its lore perfectly when needed. It feels like the game starts at a small stream but then turns into a huge river of characters, quests and stories. Not just that, in order to get through the game you’ll need to play tactically, Switching characters, using every ability in their arsenal in order to slay your opponents. And it’s way more difficult than you think. Trust me. On top of it all Shadows: Awakening is full of content and has a modest price of “only” 40$. So, is it worth your time and money? Yes. Definitely. Especially if you liked “Baldur’s Gate” or “Diablo”.

Shadows: Awakening is available on PlayStation 4, Xbox One and PC