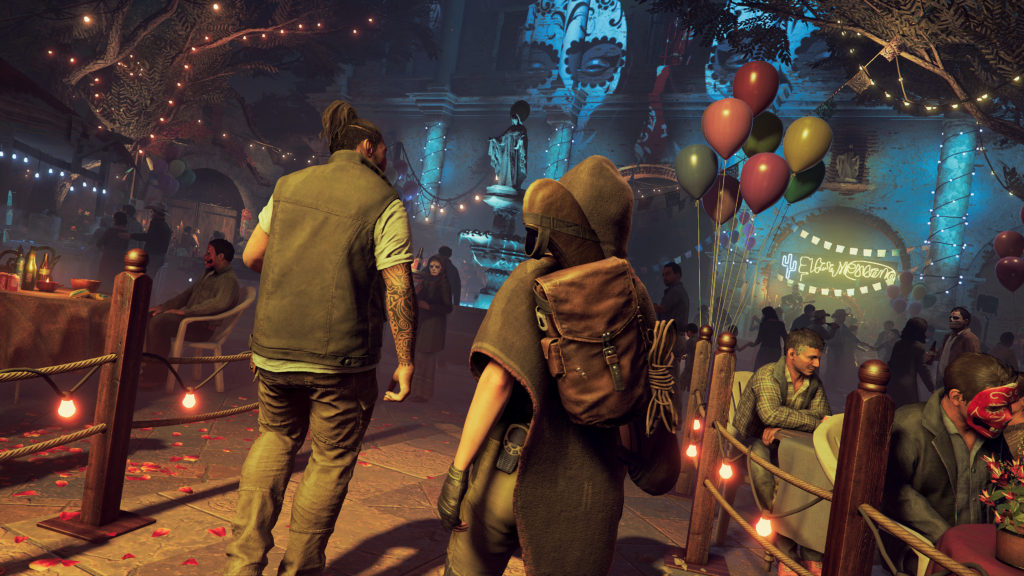 Last week our team was at Gamescom and I got the honor to play the playable demo of Shadow of the Tomb Raider.

This is the final game in Lara’s origins trilogy and it definitely feels that the stakes are higher than ever and Lara is definitely ready.

The demo begins at Cozumel, Mexico at the evening with Lara sitting with Jonah in a bar while spying on Dr. Dominguez, one of the leaders of Trinity (the secret organization) during the celebration of Day of the Dead, a holiday in Mexican tradition. They try to figure out a location of “the hidden city”, something that Trinity is looking after. Suddenly Jonah and Lara one overhear one of Trinity’s people saying to Dr. Dominguez “we found it”, Lara put on a mask and a cover her head with a hood to disguise herself before they proceed to follow Trinity’s trail.

The demo then fast-forwarded to the entrance of the tomb which was found by Lara after following Trinity’s trail. This is where I got control of Lara and the actual gameplay elements were introduced. I entered the tomb where I got through some puzzles and for the first time in the reboot era, a larger underwater section. The traversal gameplay felt very similar to Rise of the Tomb Raider and Tomb Raider 2013 with a few added features such as rope wall running, rope rappelling, large underwater sections. The puzzles seem a lot more challenging this time around, there are deadly traps scattered around the tomb and definitely more sophisticated puzzles. 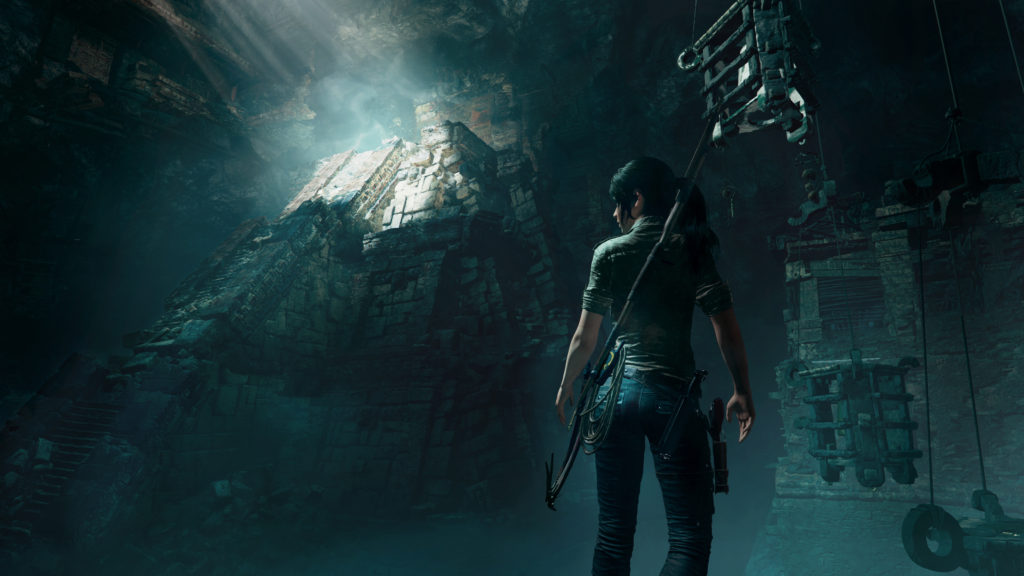 After some traversal and puzzle solving Lara rappelled down to the artifact Trinity was looking for, she takes the artifact with almost no hesitation knowing in her mind that Trinity can’t have it no matter what. A part of the wall started collapsing, Jonah tells Lara Trinity is on their way to her. I got out of the tomb and was introduced to some combat and stealth gameplay as Lara fights her way through some of the reinforcement sent to find her. The emphasis on stealth in this game is definitely noticeable and a much-appreciated addition to the combat/stealth system. Lara can now become one with the jungle, I got to hide and blend with the vegetation and lush environment as I took some enemies down on my way back to Jonah. The combat feels very similar to the past two games but a little more refined, you can now get in and out of stealth after being detected by enemies which is a great new feature that was absent in the past games.

Eventually, Lara got knocked down by a Trinity soldier and dropped the artifact she took in the tomb, Dr. Dominguez comes and pick it up, telling Lara that by taking the artifact she caused the beginning of the apocalypse: “Do you realize the tragedy you’ve unleashed?”. As Dr. Dominguez leaving the area with a helicopter Lara looks into the distance with a shock, a tsunami hit. 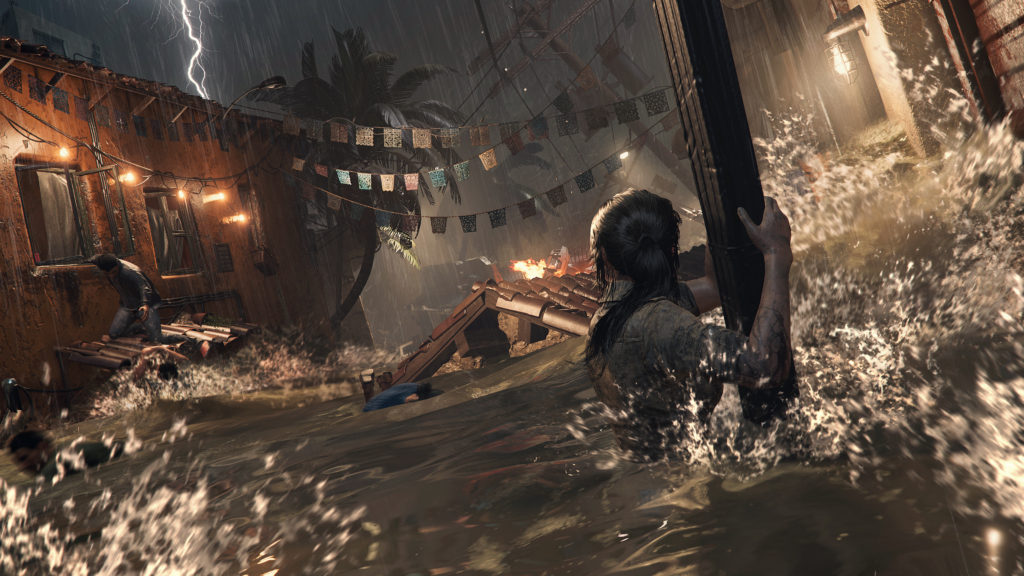 The demo fast-forwarded again to the moment Lara got to Jonah. Distressed as expected, Lara blaming herself for possibly causing the end of the world, telling Jonah what happened and insisting to come with her to stop Trinity and fix what she probably caused. Jonah tells her with an angry tone that she doesn’t know if she actually caused it and that they need to help the local people first. An intense moment that implies how in this game Lara became obsessed and so focused on haunting Trinity rather than look outside of her tunnel vision. Lara, on her knees, looks at the destruction the tsunami brought and the demo ends. A very strong opening for the game that showcases the darker tone and different direction of Eidos Montreal and Crystal Dynamics.

Overall I got a very good impression from the demo and very different vibes from it despite having very similar gameplay. The well-written dialogues an the more mature, confident Lara really shows the evolution of Lara Croft in this reboot trilogy and seeing her becoming the Tomb Raider she’s meant to be is a pure joy.

As a long time Tomb Raider fan who had much criticism towards the last two reboot games I think that this game will definitely please both classic and reboot fans of the franchise, there is a feeling of balance, both in terms of the traversal/puzzles gameplay and Lara Croft as a character. 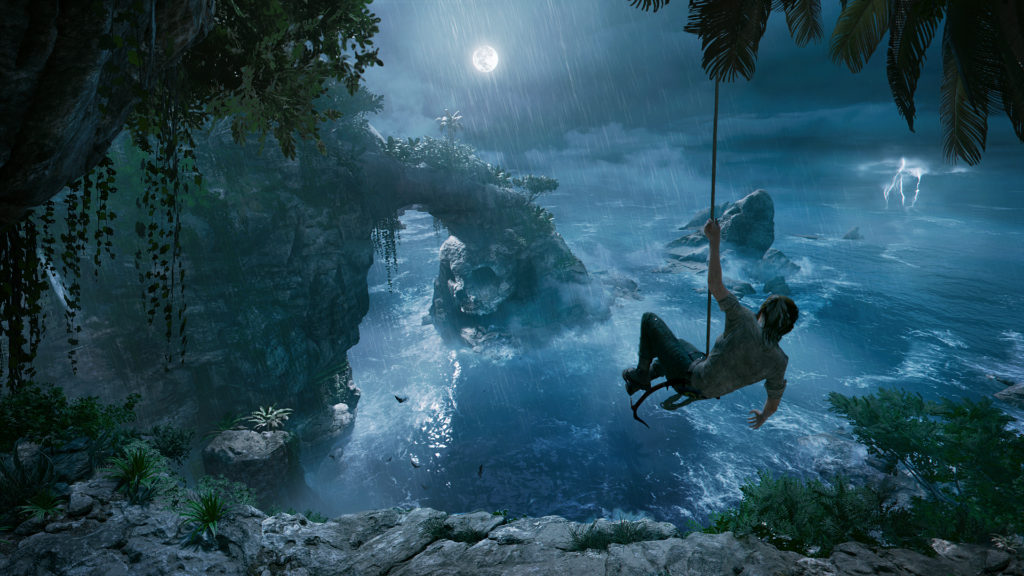