It has been more than 15 years since we saw a decent “Jurassic Park” game. Since the last game “Jurassic Park: Operation Genesis ” we haven’t seen a tycoon game that takes us billion years back into the dinosaurs era.

This brand new game that was first announced On August 20, 2017, the game was announced during Gamescom 2017 and it was the right thing the fan wanted to hear.
We saw a teaser that made the Jurassic fans go crazy and started hyping everyone around.

This new “Jurassic Park” game which was released on June 12, 2018, for the Ps4, Xbox and PC  is a business simulation game, which means that its all about the money eventually.
But actually, it’s about maintaining a successful park with a five stars rate
( and no T-rex eating your visitors).

Besides beautiful graphics and 30-60 frame rates, this game is a time-eater (in a good way).
The main goal in the game is to build a park on each of the 6 islands, one of the islands is “Isla Nublar” which is the famous island in the movies.
You start with only one dinosaur and start building and developing your own park, main missions and side missions are the ones that helping you developing and have more dinosaurs to eat your visitors (kidding).
you have to research almost everything and upgrade your enclosures fast if you want the big monsters to roll in your theme park.

Also, the game gives you a hard time, with storms and dinosaurs that are not comfortable with the place. You need to attend and stay alert to every need of the visitors or the dinosaurs.
more of that, you have three main characters that you need to please, one is from the DNA division, one from the entertainment and one from the security.
Please them all or else they will try to sabotage your park.

In Jurassic World: Evolution you can choose from 42 dinosaurs and put all of them on your theme park. you can treat them right to let them fight. 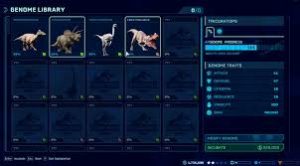 A ride on the Gyrosphere is one of my favorites, watching the Indominus Rex from close is so exciting.
I have only progressed half of the game and I already want to go back and keep playing it, I am a huge fan of the Jurassic Park franchise and its been a really hard months waiting for this game, also my expectations from the game were right and I enjoy every second of it.